We had created this post for every tradition lover! Generally, Spain is a very traditional country with many traditions, folklore and festivities. Typically, these parties are really good fun and you get to know very well the society culture.

Every province, town and hamlet in Ibiza is named for a different saint and boy do the locals know how to honour them! Each and every town will celebrate their Saint’s day with a huge feast, celebrating with great food and drink, dancing the traditional ball pagés in authentic costumes and showing off why their town is the best on the island!If you want to see Ibiza’s cultural side, you must experience a feast day. It’s also the best way to hear some of that traditional  Ibiza music..

Here the most important dates to highlight in your calendar:

Music, sports competitions and fireworks are some of the ingredients of Ibiza’s traditional Patron Saint’s day fiestas. There are activities for people of all ages. These include a tribute to corsairs and seafaring people, along with folk exhibitions. As always, the city’s God Medal is awarded on the first day of the celebrations.

One of the most old and popular dances is the the ‘ball pagés’The dance goes way back and shows clear signs of old, ancient traditions.

At ball pagés, the man plays a dominant role. He picks a woman to dance by doing a loud clack of his castanets while he is pointing at her. 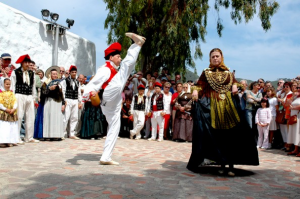 It is worth to highlight the popularity of celebrating the longest day of the year: San Juan!

The holiday season in Ibiza traditionally begins in June with the San Juan Nights. Ibiza is an island located in the Mediterranean Sea that integrates the Autonomous Community of the Balearic Islands, in Spain.

The truth is that on the night of June 23 the fires take center stage in the squares and beach where music and dancing are not lacking. A tradition whose magical time reaches midnight when it is time for the rite of purification through fire.

In this sense, this season is the opportunity to see cheap trips to travel to a town where this event is lived with frenzy, such as the town of San Juan de Labritja, located in the northern part of the island of Ibiza, an area traditionally rural which is the ideal destination for rural tourism in Spain.In this town there is an 18th century church surrounded by a traditional architecture of whitewashed houses built in stone with sloping roofs on the outskirts of the village.

The main street is a joy where the balconies adorned with flowers stand out behind the wrought iron that lead visitors to the cobblestones and stairs. There is not much to do in San Juan, and that is its main attraction. 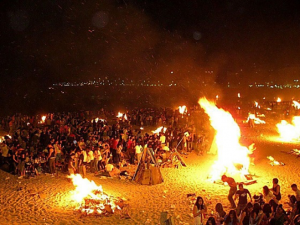 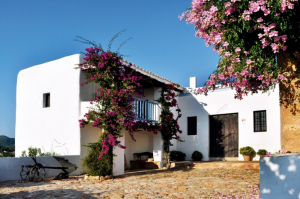 Aside from exploring the beautiful house and its grounds, you and your companions can experience the rich history of Ibiza, its agricultural importance and its cultural artefacts, including a great selection of traditional objects, clothing, jewellery and tools, in addition to beautiful musical instruments, children’s toys and furniture Traditions in Ibiza really come to life!

And of course, Ibiza honors the Virgen del Carmen, Patron of the Seawith seafaring processions in different ports of the island.

In a town surrounded by the sea, the feast of the Virgen del Carmen has a lot of prominence. Also in Es Cubells, this day is celebrated on July 16 as an employer’s holiday. 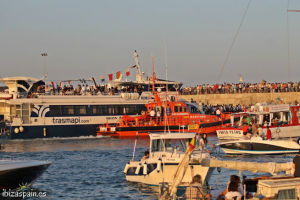 Estela Exclusive Homes is proud to present this br