Ibiza is famous for its beautiful beaches and stunning landscapes, its excellent weather and, of course, its unbeatable nightlife. An island described by Time Out magazine as “arguably the clubbing capital of the universe”. However, many people don’t know how brilliant Ibizan urban tourism is.The beauty of its cities and the charm of the villages.

Even though Ibiza is small, there are many interesting places to visit on the White Isle. In this post we want to highlight several impressive cities and the many activities you can experiment in them.

The main towns and villages on the island are not far form each other, so it is easy to rent a car, a motorbike o even a bike and go visit few of them a day.

They all have their very own, distinctive character, from the party hotspot of Sant Antoni to the sleepy inland villages of Sant Llorenç and Sant Mateu or the family-friendly Santa Eulalia.

Ibiza has a wide history and very interesting culture. Ibiza began as a port town, founded by Phoenician settlers in 654 BC. Their decline in power saw the island come under control of Carthage, during which time locals produced dye, salt, wool, and fish sauce to become a regular stop on the Mediterranean trade route.

The city of Ibiza (port city overlooking the Mediterranean) is the capital and the largest town on the island and therefore offers everything for everyone. Its lively nightlife is legendary, with world-class restaurants and a fantastic selection of bars in its beautiful historic center and in the elegant Marina Botafoch. Eivissa, as it is called in Catalan, is also home to the world-famous Pacha nightclub, where the world’s best DJs play every summer night.

You can find a large selection of small boutiques, fashion stores of the most recognized designers, shoe stores and all kinds of items. It attracts a very cosmopolitan audience all year round and in summer you will share the street equally with a lot of famous people. There are very interesting art galleries and history museums andwalking through the beautiful walled city of Dalt Vila is a history lesson! The two museums that you can’t miss are:

The Museo Pugetis a medieval-age palace, from the Catalan conquerors of Ibiza, which now keeps the paintings of Narcís Puget, reflecting the traditional live style in the beginnings of the XX century.

Also, you can find the Ibiza Museum of Contemporary Art,with an extensive collection of modern art in a very cool setting – you can see the original building work under the glass floor which looks great contrasted by the bright modern art. 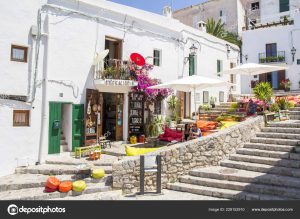 Sant Antoni is a town on the western coast of Ibiza. It is the second-largest town and municipality in Ibiza. The town is situated on the west coast of the island and is the town by which many people define Ibiza.

For two thousand years, Sant Antoni was a small fishing village that rose from the Roman natural harbor Portus Magnus. During the 1980’s the town hit a development boom, as tourists (mainly English), flocked in their thousands to visit the sunny resort and dance the night away!

As the number of tourists grew, the development of bars, hotels and other tourist infrastructure spread right around to the other side of San Antonio bay.

Sant Antoni is home to two of the main Ibiza nightclubs, Es Paradis, established in 1975, and Eden which was renamed from Kaos in 1999 and renovated in 2013.

Apart of these important cities, it is worth to highlight some pretty villages to walk around and enjoy the Mediterranean architecture. 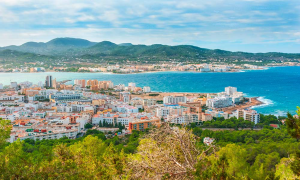 Located in the northeast of Ibiza, San Carlos is a small and cozy town whose life unfolds around a beautiful whitewashed church built in 1785.

This small village with a long history of hippy settlers and beautiful markets is a pretty white 18th century church dominates the scene. There are a few restaurants and we recommend Anita’s Bar where you sit outside with some tapas and watch the world pass by. 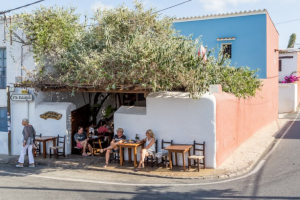 Sant Joande Labritja is a beautiful town located in North Ibiza, is the gateway to the north of the island.

This small village and municipality is located 23km north of Ibiza Town. The landscape around the village is very mountainous which provides great panoramic views across the countryside.

The village of Sant Joan is a quiet street, dominated by an imposing Christian church. It is very quiet but charming, specially in June, when the village comes alive for the famous Fiesta de Sant Joan. 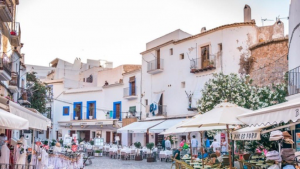 Santa Gertrudis de Fruitera is located in central Ibiza, surrounded by rich countryside and fruit trees; hence the name. This traditional village, sometimes described it as the Notting Hill of Ibiza, has become a must-stop enclave for every traveler who travels in Ibiza and also for the local people.

This small town has grown unstoppably and now maintains a cheerful and multicultural environment throughout the year. Some of its more central country houses have been converted into restaurants and bars, with pleasant terraces and gardens that are filled even in winter. 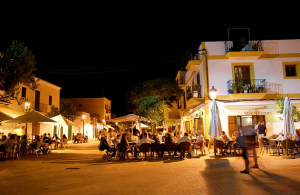