The rich and famous in Ibiza, they come in their private jets or their luxurious yachts. The island draws some of the best names of Hollywood actors, sports megastars, international musicians, DJs and socialites who can be spotted sunbathing aboard a yacht anchored in one of the island’s secluded coves or swimming in its crystalline waters. Many have even have bought properties on the island, making Ibiza their permanent summer retreat. A place where they can mingle, be seen or, indeed, hide away from prying eyes in one of the many luxury waterfront villas.

During the summer months, the rich, the famous and the wannabes all flock to Ibiza to see and to be seen, as well as to party at some of the most exclusive and legendary nightspots on the Spanish island and enjoy our pristine beaches.

Many have even have bought properties on the island, making Ibiza their permanent summer retreat. A place where they can mingle, be seen or, indeed, hide away from prying eyes in one of the many luxury waterfront villas.

The five-time Ballon d’Or winner bought a hotel on the island in the spring of 2018, the MiM Ibiza Es Vivé Hotel in Figueretes Beach, near Ibiza Town and Playa d’en Bossa. Last year, he attended former FC Barcelona player Cesc Fabregas’ post-wedding party on the exclusive private island of Sa Ferradura, together with John Terry, Luis Suárez, Carles Puyol, Jordi Alba, Kante, Pedro Rodríguez or Sergio Busquets. Messi can often be seen sunbathing aboard a luxury yacht just off the White Isle’s coast with his wife Antonella Rocuzzo and their children.

Former Formula One Group chief Bernie Ecclestone bought a luxury seafront villa in Es Porroig, on the island’s south coast, in 2017. He’s been seen dining in some of Ibiza Town’s trendiest restaurants. He’s not the only F1 professional linked to Ibiza, former champion Nico Rosberg owns an ice-cream parlour, Vivi’s Creamery Cafe, in the heart of Dalt Vila. 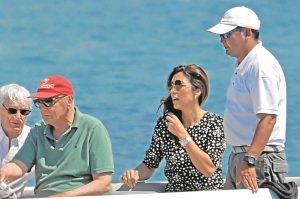 Five-time Ballon d’Or winner and football megastar Cristiano Ronaldo usually chooses Ibiza for a well-deserved break (or two) every summer. Even after he left the Spanish capital, Madrid, to play for Italian team Juventus in 2018, he still kept coming to the White Isle frequently. Last summer, he kicked off the season here in May and then came back in July after playing the World Cup in Russia. Cristiano owns a restaurant in Ibiza, Tatel, together with fellow star sportsmen Rafa Nadal and Pau Gasol, as well as Spanish hit singer Enrique Iglesias, and he’s expressed his wish to open a hotel of his CR7 chain on the island. 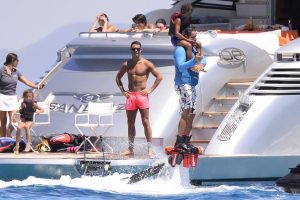 The superstar Scottish DJ has announced not one but two residencies on the White Isle, in Pacha and Ushuaïa, The highest-paid DJ in the world already left his multi-millionaire contract in Las Vegas for a few weeks last August to spin hits like “We Found Love”, “This is What You Came For”, “Summer” and “How Deep Is Your Love” in Ibiza. He’ll probably invite some of his celebrity friends to join him behind the decks: Ariana Grande, John Legend, Dua Lipa, Rihanna, Travis Scott, Pharrell Williams, Katy Perry, Sam Smith… there’s a few to choose from! 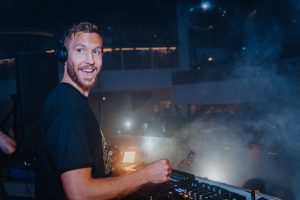 Who do you think you’ll bump into ?

Estela Exclusive Homes is proud to present this br