A long long time ago….

Vestiges have proven that the island was inhabited in the Bronze Age. Later, the Phoenicians arrived (8th century B.C.) and after them, the Greeks, who called it the ‘Pityusic Islands’, “islands covered with pines”. Then, in 654 B.C., the Carthaginians established and founded Ibosim (in honour of God Bes). The island under control of Carthage produced dye, salt, wool, and fish sauce and became a regular stop on the Mediterranean trade route.

The Muslims named it Yābisa and settled in the 10th century, reaching its apogee in the 11th and 12th centuries. Finally, the Catalans founded Eivissa city in 1235. They quickly changed all the names of the cities—adding first the names of their saints—and rebuilt their churches over the original Arab mosques. The architecture in Ibiza is a fundamental reason for the UNESCO to declare Ibiza a World Heritage Site. 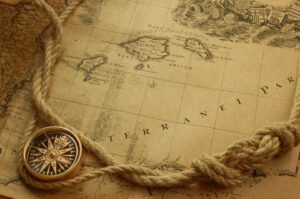 The Myths and Legends of Ibiza

Rewinding to a few hundred years before Christ, the original settlers of Ibiza, the peaceful, prosperous and pagan Phoenicians worshipped the male sun god Baal and his female partner, associated with the moon, Tanit, a warrior goddess of dance, fertility, creation and destruction. She is the goddess who protects Ibiza and there was once a temple dedicated to her on the same site the cathedral now stands. Many businesses on the island are named after her: Tanit Autos, Tanit hotels, Tanit souvenirs etc. She is still very much here on the island in spirit. Some say that Tanit’s place of residence is on the west coast, home of the sunsets and that she was born on a particular site that was part of Atlantis: the mystical Es Vedra.

In Ibiza the islanders transmitted their stories orally, whether real or fictional characters, and these stories have survived to this day. They are call Rondaies. Joan Castelló Guasch, spent many years recollecting these tales in which beings create the mythology of Ibiza. They look like little elves but have their singularities. Among the main characters in Ibiza mythology, there are two: Fameliar and the Barruguet.

The Barruguet is the most popular character in this mythology. He is said to be small in height, elongated, strong, almost always invisible and can appear in the form of any animal. The main purpose of the Barruguet is to be mischievous, to make life more difficult, such as putting salt or ash on food making it bitter or tickling young children to make them cry.

The Fameliar is a little elf with a big ugly head, a big mouth and a terrible voice, which can only be found in the islands of Ibiza and Formentera. If you want to see a Fameliar, there is only one time every year.  On the night of San Juan, you must go under the bridge of Santa Eularia. At midnight you must look for a special herb, which grows easily but also disappears just as fast. If you are quick enough to grab some, you must put it immediately inside a black bottle and close it, and after 3 months it will become a Fameliar.

Other traditional beings of the Rondaies (traditional oral tales) in Ibiza are:

The Follet is neither a spirit nor an anthropomorphic being. It is only a gift, a power, a faculty. It is said that those who have Follet can fly, or move from one house to another, invisible, in the blink of an eye. So, when a child is very restless, people say that he has Follet, as a pleasantry. It was believed that the priests of Ibiza could give that power.

Crespells are a sort of monster that lives inside Sa Cova des Crespells, in Buscastell, in the center of the island. Inside this Cave live seven tiny Crespells and a big one. They have wrinkled skin full of large warts. The Crespells growl all the time and shoot fire through their eyes. These tales were told to children so they would behave.

These are a type of worm or light beams that comes out at night above the stone walls. They are related to the soul of the deceased.

They are connoisseurs of herbs, flowers, and shrubs and are capable of casting spells. You can still see in many windows of rural houses a painted white cross to protect the entrance from witches and evil spirits.

The legend says that they were the ones who created the famous Ibizan digestive herb drink to enchant humans to do what they wish.

When you visit the island, you will still see these white crosses.

In Ibiza mythology there are also little fairies capable of being very mischievous.

The story of this giant who lived on the island of Es Vedrà and who loved octopuses is told in the Rondaies tales. 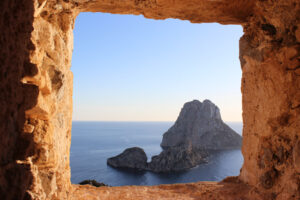 This islet is said to be one of only three places on Earth with the same energetic magnetic field as the Bermuda Triangle and the North Pole.

The legend of Es Vedrà in Ibiza also has its chapter told by sailors who declared sightings of huge shadows under their boats. These shadows of unknown marine animals, strange objects, were something they had never heard of.

Even divers heard strange sounds under the water and shoals of fish behaving in an altered way or lights that seemed to have no logic whatsoever.

Another belief about the legend of Es Vedrà has to do with an aura or colors that the islet emits.

The founder of what is today the parish of Es Cubells (in Sant Josep), Father Palau, wrote in 1854 about strange phenomena and sightings!

There is also the Caso Manises. On November 22, 1979 during a flight between Mallorca and Tenerife, the pilot did an emergency landing in Valencia after reporting seeing strange and rapid flashes of lights hitting his aircraft as he was flying over Es Vedrà.

There have also been reports of odd flying objects and circles of light emerging from the sea by local fishermen and this leads to the belief that aliens have their base there.

Ibiza is an ancient island, where many different stories of people and civilizations converged and thus created a magical place where people still experience mystical things.

Nice property located in a quiet area close to Ibi