The main island of Formentera is 19 kilometres (12 mi) long and is located about 6 kilometres (4 mi) south of Ibiza.  Its major villages are Sant Francesc Xavier, Sant Ferran de ses Roques, El Pilar de la Mola and La Savina. Small as it may be Formentera is 83,24 km², and has been since the 1960s a hub of creative energy and inspiration.

Formentera is famous for its pristine white beaches and turquoise crystal clear water: an overwhelming sight. 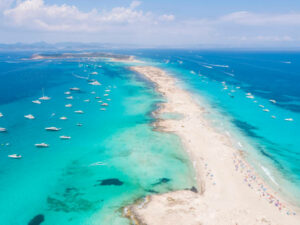 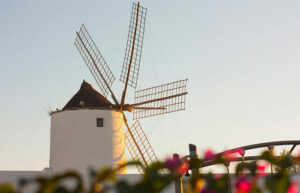 The island was occupied in prehistoric times, going back to 2,000–1,600 BC. Archaeological sites of that period remain in Ca na Costa, de Barbaria (multiple sites) and Cova des Fum. The island had been occupied by the Carthaginians and then by the Romans. In the following centuries, the Visigoths, the Byzantines, the Vandals, and the Arabs spent time there. In 1109 it was the target of a devastating attack by the Norwegian king Sigurd I the head of the « Norwegian Crusade« . The island was conquered by the Catalans and added to the Crown of Aragon and later became part of the medieval Kingdom of Majorca. From 1403 to the early 18th century, the threat of Barbaric pirate attacks made everyone flee the island.

Now Formentera offers many options for living in this paradise island, ranging from beautiful hotels, apartments, and luxury villas to rent in the summertime.

The island offers many activities: art exhibitions in Light Houses, music festivals, art galleries, dancing, etc. Here is the link to the information Agenda: everyday there is something new to enjoy.

Another thing that makes Formentera famous is the artists who arise or lived on the island. The Canadian writer Patrick Roscoe was born in Formentera.  Joni Mitchell wrote her 1971 album Blue on the island while Bob Dylan once lived in the Cap de Barbaria lighthouse. Author Matt Haig wrote in Reasons to Stay Alive about visiting the island often in his twenties. The opening track of the album Islands, « Formentera Lady”, by King Crimson is named after the island.

Music resonates all over the island. Pink Floyd’s connection with Formentera began in 1967 when the band members, Roger Walters and Syd Barrett visited the island to stay with Dr. Samuel Hutt, aka Hank Wangford, an English country and western songwriter who was renown as London’s long-haired rock-and-roll doctor in the sixties due to his work with drug addiction which, of course, brought him into contact with many artists.

Formentera has the world-renown guitar and bass workshop, Formentera Guitars, located in the town of Sant Ferran De Ses Roques. Handcrafting instruments for decades, Formentera Guitars is one of the most prestigious guitar-building schools in Europe.

As for the main villages of the Island

Sant Francesc Xavier is today the center of the fashion market and on its main streets are small boutiques with a selection of items as clothing, decoration, and jewelry. From May to October, small craft stalls are set up on the streets, some of jewelry or leather stalls. Many offer handmade crafts of Formentera. On Tuesdays and Saturdays (mornings) in the Jardí de Ses Eres (behind the church) there is a flea market with clothes, books, and second-hand items. 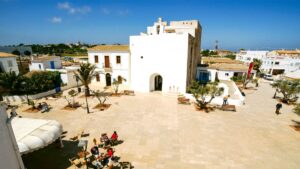 Sant Ferran de Ses Roques is an inland town located in the center of the island, where the roads that come from Sant Francesc, Es Pujols and Pilar de la Mola cross. The town of Sant Ferran de Ses Roques is where hippies and bohemians gathered at the legendary Fonda Pepe that is still open. Here you will enjoy the free, creative, and festive character still alive along the artisan and art markets in the summer months, every night except for Wednesdays and Sundays. 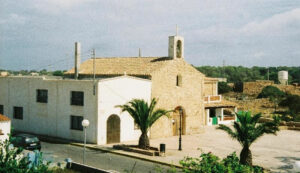 El Pilar de la Mola is in the eastern part of the island, on a higher plateau. This plateau is surrounded by imposing 90º cliffs that fall to the sea. Close to the town of El Pilar de La Mola is the highest point in Formentera with 192 meters.
El Pilar de la Mola has a different landscape because it receives more rain here. This is where farmers produce the island’s wine. Long stone walls along the road protect the crops from the strong winds that fortunately subside in summer. At the end of this road is the beautiful La Mola lighthouse that has been filmed several times. This building is located right on the edge of a cliff almost 200 meters above the sea level. 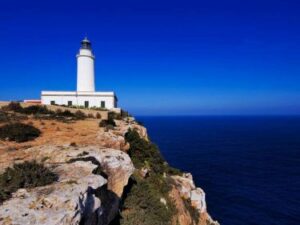 If you take the ferry boat from Ibiza you’ll arrive to La Savina. This is the commercial port, an exclusive marina. You will find here the crème de la crème of the nautical people. Many ferry services arrive from Ibiza and the mainland of Spain, as well big yachts and beautiful boats from all around the world. 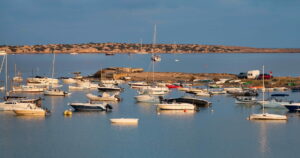 Walking around the harbour, there are bars, cafes, and restaurants and, in the summertime, a long line of market stalls selling clothing, jewelry, souvenirs and hand-crafted goods. You can see Ibiza and the islet of Es Vedrà too. There are also many bike, scooter and car rental places.
La Savina is a great place to settle down and you can easily access from here any part of the island. Playa Illetes and Playa de Levante are close by. La Savina has an exclusive ambiance.

And as for Nightlife in Formentera…

There is no better way to start your evening than having a drink at one of the many beach Chiringuitos.  The wooden kiosk that is called Piratabus at Es Arenals beach is a lively location and is famous for its excellent mojitos. Beso Beach, close to Playa Illetes, is a great place to head for sunsets with cocktails and dancing. Blue Bar on Playa Migjorn is perfect for staying up late at night – you will hear some top-quality music here.

Formentera is one of the most beautiful islands in the world and a place with a lot of magical energy, just like its sister island Ibiza.