In the 70s Ibiza was already desired throughout the whole planet.

From 1960 in Ibiza, as in all the Balearic Islands, began a frantic tourism growth here had its own personality, with the hippie movement, and that eventually would lead to a young and party tourism, becoming the capital of the young party in Europe.

The beaches and roads had not yet known the massification, the Pachá and Glory´s nightclubs appeared on the night map rising to the wave of the tourist explosion that began in this decade. 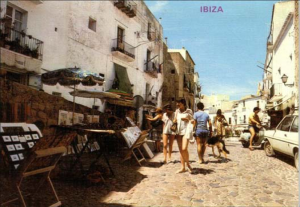 The island was a haven of peace, the destination that many wanted to reach.

During the seventies the conjunction of hippies and pages gave Ibiza a unique uniqueness in the world.In the streets of Vila (many of them still cobbled), liberal foreigners and attached to the slogan of “make love and not war”were mixed with the Ibizans dressed in their traditional costumes, including those silver braids that appeared under the handkerchief with the one who covered his head. 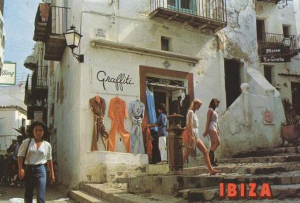 Everyone knows the enormous importance that the cultural world of Ibiza had in the decades of the sixties and seventies of the last century. The arrival of a large number of artists, the birth of one of the first contemporary art museums in the country, the ICSID design congress, the hippy movement, the appearance of numerous art galleries throughout the island, among which The Corsair, because of his link with the Ibiza 59 Group, that of Ivan Spence and Carl van der Voort, will give us an idea of ​​the creative situation that took place in those years, ”says Verdera.

In the year 1971, the International Council of the Industrial Societies of Design (ICSID) celebrates his congress VII in the island of Ibiza. What till then had been an event of eminently professional character transforms, in his from Ibiza edition, in something more like a festival multimedia. 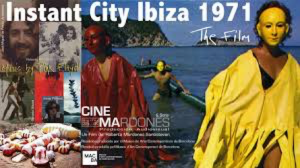 During the days of the congress there happen the artistic interventions, the concerts and the conversations that approach topics not only related to the design, but also linked to the architecture, the urbanism, the artistic production, and to philosophical diverse questions. The congress is unmarked voluntarily of his habitual headquarters, occupying hotel rooms and being opened for the population in Sant Miquel’s bay.

Many of the persons who approached the island with the conviction from which there” something was happening ” they lodged at the Instant City, a pneumatic inflatable and ephemeral architecture that finished turning into an enclave where to test new forms of life jointly.

The 70s in Spain had a meeting center for the first hippies; Ibiza Young people who, with their colorful clothes and wearing the peace symbol wherever they went.

They not only came from Spain. Ibiza became the preferred place for hippies from all over Europe, and the world. In this cosmopolitan and unique breeding, the Las Dalias Market was born. 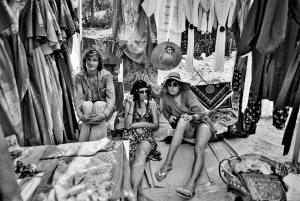 Las Dalias Ibiza was born on the night of November 4, 1954, Joan Marí, farmer and carpenter, concentrated in his shop all the countrymen of the area to celebrate the celebration of his patron, San Carlos. The meeting became a tradition and turned Las Dalias into the ballroom of the local population during their first years of life.

When the 60’s arrived, mass tourism appeared and the first tour operators took hundreds of tourists to Las Dalias to enjoy, for 125 pesetas,a live flamenco show, and barbecue washed down with all the sangria and champagne they could drink.This marked the beginning of the history of a place that, at that time, had to expand to accommodate all who came.

In the 70`s the hippies appeared on the white island. At that time the market of Es Canar started, and Las Dalias de Ibiza was the place chosen by the “peluts” (‘peludos’, that is what the hippies called the Ibizan countrymen) to meet at the end of the market day. Drums, guitars… The Las Dalias garden became the perfect setting for the first jam sessions every Wednesday. 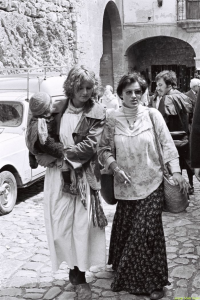 Fifty years later, you can still feel the seventies atmosphere. The hippies and deserters of the Vietnam War changed the spirit of the island. Peace, free love, nudism and psychotropics arrived to stay.